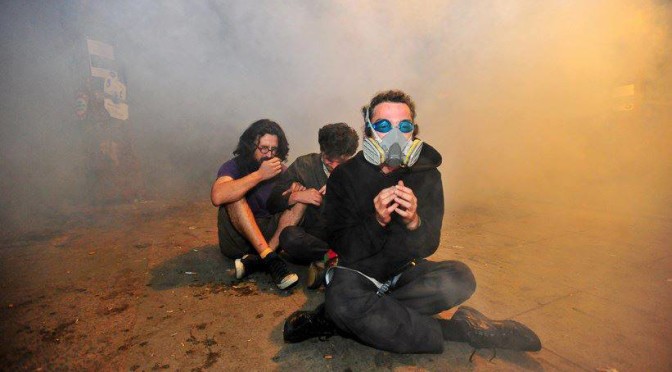 We can call it the Turkish revolution now, it has started as a pacific environmental protest and it has degenerated in the usual story of violence and abuse of power from those authorities that should protect their citizens. To better understand what it is going on these days in Turkey I asked Selin and Pinar, two Turkish girls to tell me their side of the story. In this way I hope to grant a direct access to first hand information and to help pacific demonstrators to spread their words.

First of all I would like to thank you for your proposal to help me to share these lines and pictures with your friends in Italy.

As Italian media has been saying it had been started as an environmental event in Gezi park in Istanbul. The demonstrators were environmentally sensitive young people. On the 3rd of 4th day of this event Turkish police had started to put them outside of their tent at the park by using force and subsequently water cannon, tear gas and other chemical gas. By seeing this aggressive police’s treating against those young people, members of the Turkish public (namely Secular Turks, writers, singers, Unions, High school students, Universities etc.) have started to support and to join those young people at the Gezi park. Finally, This is spread from Istanbul to the most important cities in Turkey.

You, Western people are probably wondering why are hundred of thousand from the cities demonstrating for a park in this way. Unfortunately, we are not so environmentally sensitive. The real reason of our anger is going more about the measures, laws Erdogan had taken the last months, years. The Gezi park was the last drop of water which let the bucket overflow.

Now I want to give the answers to your questions. Who is protesting now in those cities?

They are members of Turkish public. High school students, Our artists, writers, columnists, comedians, lecturers, lawyers, some Turkish unions. Not only the young people but also the old ones. The old people are not always in the streets cause of their age, I guess. My friends were/ are at the Kizilay square, Ankara. And If I would not have exams right now in Belgium, I would be there as well. There are also provocateurs who is creating problems and motivating the Vandalism.

Everyone is participating by its own reason. I could give you a couple of examples;

If you want more examples, unfortunately It will be not difficult to find for me.

As you can see, we do not have democracy anymore, I am not using the word Turkish government as you could notice. Cause It is Erdogan who makes the decisions.

I want that the Western people will not get the wrong idea about this situation in Turkey. Those people are not rebels. They just want their human rights and freedoms. And for sure, all of them want one thing in common “ Erdogan resign”!

I am accepting more pressure from Europe on “the Turkish Government” so that Erdogan would stop using water cannon, tear gas, chemical stuff and aggressive treatment of police against the protestors. And We, Turkish public will take care of the rest and the rest is the resign of Erdogan.”

“Hi dear, thank you very much for your concern and support.

I am very happy that you guys care about it and contribute to the solution.

For the last 4 nights – in Ankara- police attacking demonstrators with plastic bullets, pepper spray, tear gas, blast bombs, and I dont know else what. They intentionally hurt and injure people, even killed some people but number is not clear yet. Shops, cafes, and houses are damaged on purpose and pepper sprays are thrown indoors to suffocate people. Undercover cops sneaking into protests, damaging private and public properties and main stream Turkish media publishes these as demonstrators did.”

I don’t want to comment these letters, anyone is free to draw his\her own conclusion. What I would like to do with this post is to helping Turkish people who are protesting to spread information on what an why this riots are happening in turkey

Here some pictures taken by demonstrators