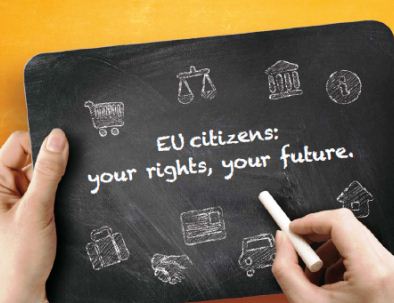 By its nature EU Citizenship is affected by a cross-border effect, that means that we can perceive it mostly when we use the rights we are granted by EU citizenship, and the only way to directly experiment them is to travel around Europe. True there are some rights granted by the EU Citizenship that does not necessarily need move around Europe in order to be perceived and experienced, like for example the right to petition to the European Parliament or to the Ombudsman or the recent right to propose an European Citizens Initiative, but there is still few information and few formation on this topic.
How can we include those people who do not move across borders? What should we do for making them more aware of their rights as European Citizens? How can we grant information to reach them?
During this European Citizens Year in 2013, several conferences, debates and information campaigns has been organized. These actions has made possible also for those citizens who do not cross borders to participate and to acquire informations and to get familiars with their rights as EU citizens. This is the right path to follow, and it must be strengthened. EU institutions should foreseen continuous and accessible information for everybody, and Civil Society Organizations should continue to create debating opportunities and should actively help information to reach people.But, participation to debates, and collective information that are available, still requires some degree of “active” participation by people. For example, if someone want to know what European Citizen is, he can look it up on the institutional sites of the EU institutions and there he will find tons of informations. Still the mere act of looking for those informations would require the will of citizens to actively looking for them.
What about inactive citizens? And what about those who do not know how to use the Internet or do not have the opportunity to participate to some of the activities mentioned above?
There is the need to widespread the means of informations, not only using the Internet but also using other ways, some more traditional ways as well. One example could be that of foreseen some compulsory minutes dedicated to EU matter on the National Newscast. Creating some advertisements to be transmitted in all the Members States. This special spaces for European matters informations may already exist, but usually they are transmitted in low poblic share hours, and this need to be change. All national broadcasting news must have a daily European issue space. In this way we will have Citizens to be informed and also formed in a passive way and certainly they would not need to move across Europe in order to feel European Citizenship.. This may also be the push they need to activate themselves.